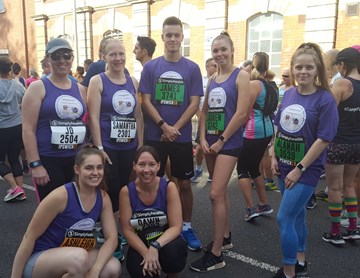 Eight runners from Larking Gowen entered the Great East Half Marathon, which took place in Ipswich on Sunday.

The dedicated team ran the gruelling course raising money for Elmer’s Big Parade Suffolk in aid of St Elizabeth Hospice, which supports people with a progressive or terminal illness.

“Many of us know about the Hospice through their incredible work with family members and the wider community, but the service relies on public donations,” said Larking Gowen Partner, Becky Ames. “We’re lucky to have such a fantastic hospice here, and my colleagues and I wanted to help,” she adds.

The team of eleven raised £895, making a significant contribution towards Larking Gowen’s fundraising target of £3,500.

“We’ve been hugely encouraged by the donations we’ve received so far” says Larking Gowen Director Jo Fox, who began running with the team 14 weeks ago “The training was a challenge, of course, but it’s was also a lot of fun. Above all, we know every penny given to support us will be spent on patients and their families,” she adds