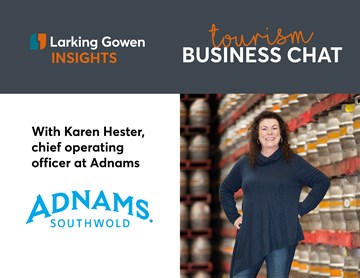 The series finale is a chat with Karen Hester, Chief Operating Officer of Adnams brewery in Southwold. Karen describes her story as ‘from mop to top’ – starting her career at Adnams as a cleaner, she’s now an award winning, glass ceiling breaking COO.

She chats to Chris about all things lockdown, pivoting, the digital revolution, sustainability, stay-cations, the importance of wellbeing coming out of the pandemic, and much more, but this episode is really about the story of Karen’s personal journey into the world of business, and of her successes along the way.

Karen started her career, as a young woman, in the army, in part to help escape a turbulent childhood home. When she became pregnant, she was forced to leave, whilst her husband, also in the army, could stay. So, she sued the MOD, and won! Her case is still cited to this day in reports and teaching, and this experience also led to her personal pursuit of justice for all, and her current role as a magistrate.

Karen later joined Adnams as a part-time cleaner, where her potential and work ethic was spotted. She began working her way up, gaining experience in all areas of the business, including logistics, and has spent decades breaking down the barriers that society puts up around women in business, and smashing stereotypes, particularly around executive roles for working mothers.

During her trailblazing career, she has overseen multi-million pound rebuild projects with a focus on sustainability; has been voted East of England Businesswoman of the Year; and has been given an honorary doctorate from the University of Suffolk.

Despite all of the focus on her success as a woman in a male-dominated world, she does not believe that women should be given roles they don’t deserve, believing that giving a woman the role of a director BECAUSE she’s a woman is just as insulting as NOT giving it to her because she’s a woman! She speaks candidly about the challenges women need to overcome in order to reach their potential, including resisting imposter syndrome, and combating emotional bias in decision making.

This episode is a must-listen, not just for business leaders, but for anyone interested in the role gender plays in the workplace, and anyone in need of a little bit of inspiration, and motivation to succeed!

If you are enjoying Tourism Business Chat, please subscribe on Apple Podcasts, Spotify, or wherever else you get your podcasts, so you don't miss out on series three which launches soon!