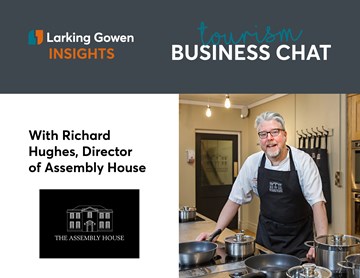 This week, Chris speaks to Richard Hughes, Chef Director at The Assembly House in Norwich, and founder of the Richard Hughes Cookery School. In his long career, Richard has gone head-to-head with Gordan Ramsey for National Chef of the Year; worked in Michelin starred restaurants; worked at the Ritz and Norwich Theatre Royal, amongst others; he’s even cooked for the Queen Mother!

Richard is credited for the resurgence of The Assembly House and, whilst remaining relentlessly positive throughout this last year, the fact remains that major changes had to be made in both of his businesses. Richard reflects honestly on lockdown, giving his insights into what the day-to-day has looked like for The Assembly House this past year; now “the poshest drive through in the city” – his words.

Richard chats about how policing the social distancing rules, when they could open, was tough, and how plans made in the first lockdown went to waste, as they didn’t account for further restrictions. He talks openly about how Eat Out to Help Out was financially a life raft, but probably not the morally right thing to do.

The hospitality trade is historically a tough sector to work in, but Richard believes that the ‘badge of honor’ that came from working 17-hour shifts on no sleep is a thing of the past. He describes the sense of family that teams can reach when staff wellbeing is a key component of a business model, and that retaining loyal staff, and investing in them, is vital for long-term success.

Chris asks Richard about the reduction in VAT; new trends in bookings; how he thinks people will view local businesses moving forwards; and his number one rule in business, “Don’t let anyone else sign your cheque book!”

Richard also lets us in on his “apple pie syndrome” and his uplifting message for the sector. Insights not to be missed, from a man at the top of his game.

You can subscribe to Tourism Business Chat on Apple Podcasts, Spotify, or wherever else you get your podcasts. Make sure you subscribe, so you don't miss out on our upcoming episodes; next week Chris speaks to Ruth Knight from Norfolk Broads Direct.