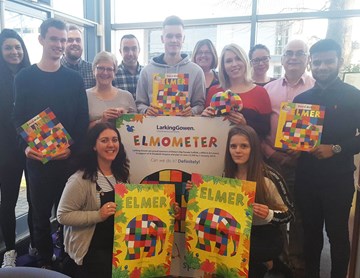 Larking Gowen was one of nine ‘Early Bird Herd’ firms challenged to raise £3,500 by January 2019, as part of next year’s Elmer’s Big Parade Suffolk in aid of St Elizabeth Hospice. We can announce today that we’ve smashed that target, raising over £4,700, and well before the deadline.

“We thought it might be ambitious to raise £3,500 by January 2019,” says Becky Ames, partner at Larking Gowen. “However, staff have been amazing. We’ve already raised over £4,700, and we hope to raise more.”

To raise the money, staff took part in the Midnight Walk held in May this year, and we entered a team of runners for the Ipswich Half Marathon. We also challenged 17 local firms to a crazy golf tournament at Ufford Park, in Woodbridge, in September.

In 2019, the St Elizabeth Hospice appeal will centre around Elmer’s Big Parade Suffolk, a trail of Elmers through the streets of Ipswich, celebrating 30 years of the popular patchwork elephant. This follows the hugely successful ‘Pigs Gone Wild’ trail, which in 2016 helped raise over £200,000 for the Hospice, and is estimated to have brought an extra £1 million into the local economy.

Norman Lloyd, Campaign Manager for Elmer’s Big Parade Suffolk, said, “As a member of our Early Bird Herd, we had set Larking Gowen the target of raising an additional £3,500 on top of the sponsorship they had already committed for their sculpture, so to have raised more than £4,700 already is fantastic! It is clear their hard work has really paid off; we are very grateful for their support for our campaign, which is ultimately all to help St Elizabeth Hospice.”

“The Hospice offers specialist support and advice to patients and their families,” continues Becky, “but they need to raise £10.5 million a year to do this. I’d like to thank everyone involved so far for taking up the fundraising challenge with such enthusiasm, and for being part of huge community support for St Elizabeth Hospice.”